From early on, Trump littered the campaign trail with false promises he had no intention or ability to deliver on. Some were trivial, some were petty, some were heartless. Some examples: 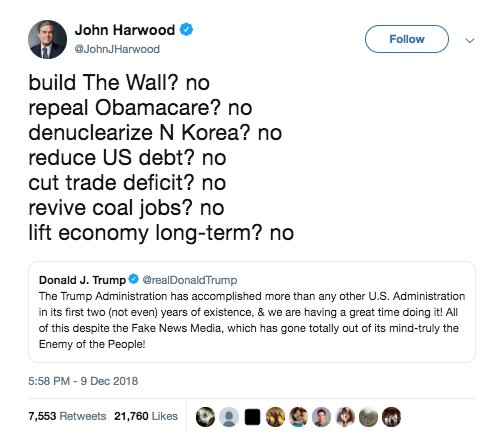 The list goes on. His promises that Dreamers “have nothing to worry about”? Lie. His promises to protect manufacturing jobs in the U.S.? Ask the GM employees in Ohio and Detroit how well he’s followed through on that particular promise.

He’s such a liar, in fact, that The Washington Post fact-check team created a new category of lie for him: the Bottomless Pinocchio.

“The bar for the Bottomless Pinocchio is high: The claims must have received three or four Pinocchios from The Fact Checker, and they must have been repeated at least 20 times.” 14 statements made by Trump qualify for the list right off the bat.

The volume of the lies is staggering, but what’s even worse is what’s underneath: false promises to American workers, endless corruption, and the betrayal of fundamental American values.

White House Chief of Staff John Kelly’s tenure is coming to an end. We’ll save his lowlight reel for another day (family separation, for starters).

Now, Trump is seeking a replacement, and he’s running into quite a problem: No one wants the job. Even Trump’s friends don’t want to work for him, according to reports that Treasury Secretary Steven Mnuchin and OMB Director Mick Mulvaney are actively uninterested in the role.

Really, who can blame them? Being Trump’s Chief of Staff comes with the basic requirements of willingness to obstruct justice, managing a tyrannical social media addict, and steeling oneself against the real likelihood of public humiliation.