“Why didn’t you subpoena the president?”

That’s just one of the questions Special Counsel Robert Mueller should answer during his testimony before Congress on Wednesday.

Mueller’s report paints a clear picture of how Trump colluded with a hostile foreign power to get himself elected and provides strong evidence that he obstructed justice.

Now, we’ll finally get to hear testimony directly from Mueller himself. Ahead of his appearances before the House Intelligence and Judiciary Committees, The New York Times released a list of 19 questions they hope Mueller will answer. 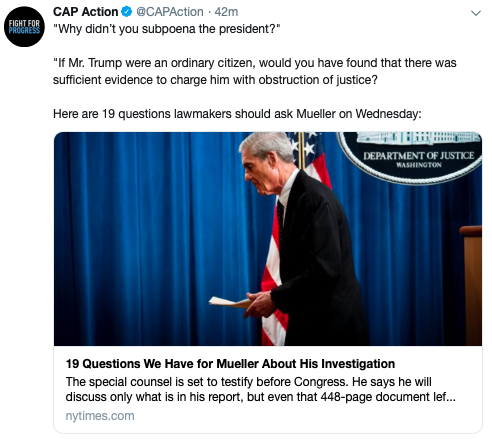 In October 2016, Trump gave a speech lamenting that “too many African Americans have been left behind.” He promised to change that. He asked condescendingly, “What the hell do you have to lose?” Now we know.

Two-and-a-half years into the Trump presidency, Black Americans are still falling behind—and Trump’s policies are making it even harder to get ahead.

Here are five of the Trump administration’s broken promises to African Americans: