Republican cowardice and complicity on display

193 out of 197 House Republicans stood in support of Trump’s racism last night when they voted against the House resolution condemning his racist tweets. In fact, they didn’t just endorse Trump’s racist display; they actually voted to condemn House Democrats for calling him racist, demanding Speaker Pelosi’s words be taken out of the Congressional record.

Trump’s racism is not new, nor is the Republican refusal to call him out on it. The leaders of the House and Senate Republicans both emphatically denied that Trump is racist in press conferences this week. Senator McConnell wouldn’t even give a straight answer when he was pointedly asked how he would feel if his wife, a first generation immigrant and current Transportation Secretary, was told to “go back to her country.” 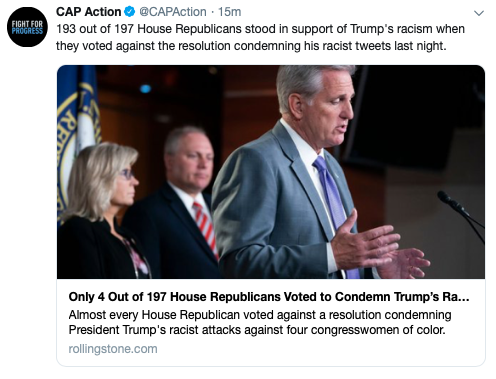 Trump takes his racism and failures to North Carolina

Trump is in North Carolina today at East Carolina University, where he’ll again try to distract from his failure to deliver on promises he made to working families.

From protecting people with preexisting conditions to raising wages to cutting taxes for working Americans, Trump’s trail of broken promises follows him from state to state.

For example: raising wages. Trump promised “new jobs and higher pay.” Instead, he threatened to veto the House’s upcoming effort to raise the minimum wage to $15 per hour with the Raise The Wage Act. How will he defend that today at East Carolina University, where a student working a minimum wage job would have to pay their entire salary for two years straight to afford a four year degree?