As part of a new plea deal with Mueller’s team, President Trump’s former attorney and fixer Michael Cohen pleaded guilty in federal court this morning to lying to Congress about the Trump-Russia investigation. The Russia investigation has now revealed at least 92 contacts, including 27 meetings, between the Trump team and Russian-linked operatives.

Cohen’s admissions are not looking great for Trump:

Trump’s reaction to Cohen’s plea was the usual string of denial, insults, and nonsense, but he canceled an upcoming meeting with Russian President Vladimir Putin just after the news broke.

Cohen is far from the only Trump associate to have lied to Congress regarding Mueller’s investigation. According to The Moscow Project, at least six other members of Trump’s inner circle have been credibly accused of lying to Congress.

CONGRESS IS GOING TO LOOK A BIT DIFFERENT COME JANUARY.

Nearly every House race has been decided, and the new class of Democratic House members is more diverse and representative of the American public than ever before.

The same can’t be said for their Republican counterparts. Surprise, surprise. 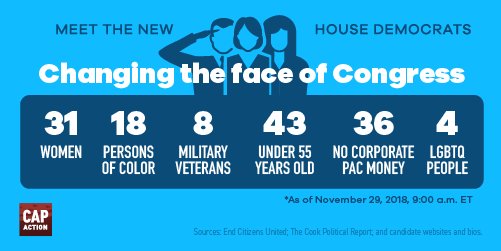 THINKING CAP: THE LIFE AND DEATH OF SANDRA BLAND.

This episode contains sensitive language that may not be suitable for all listeners.

In July 2015, Sandra Bland, a 28-year-old black woman from Chicago, was arrested and jailed for failing to use a turn signal. Three days later, she was found hanging from a noose in her jail cell, sparking a groundswell of protests and activism nationwide. Now, three years later, a new HBO documentary explores the never-before-told circumstances surrounding her death, punctuated by Sandra’s own commentary that seemed to foretell her own fate. This week’s pod was recorded at the Center for American Progress’ live screening of the documentary, “Say Her Name: The Life and Death of Sandra Bland,” in which Daniella moderated a panel with Cannon Lambert, the Bland family attorney, and David Heilbroner, the film’s co-director.