96 Americans are killed with a gun every single day in the United States.

That’s a gun murder rate 25 times higher than in any peer country. Americans are tired of vigils, thoughts, and prayers; Congress has to take action to save lives.

That’s why House Democrats introduced H.R. 8, a bipartisan bill that would require universal background checks for the sale of firearms. Here’s the deal:

Enough is enough. No more thoughts, prayers, or moments of silence. These bipartisan bills are key first steps to ending gun violence in America.

The House will vote on these bills this week. Call your Member of Congress today, and demand they vote YES on #HR8 and #HR1112. 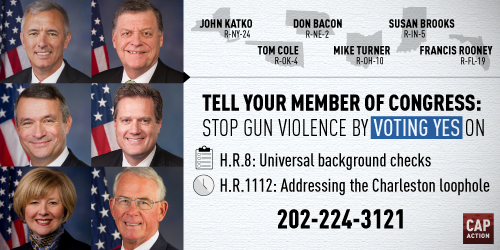 YOU COULD BE AN AMBASSADOR, TOO.

All you have to do is donate millions to elect Trump.

In an unprecedented move, Trump announced Kelly Knight Craft, a GOP donor with deep ties to the coal industry, as his nominee to be ambassador to the United Nations. She and her husband, Joe Craft, donated a combined $1.5 million to Trump and other Republicans in the 2016 elections. Mr. Craft also contributed $1 million to Trump’s inauguration.

Craft is the current ambassador to Canada and is the most recent in a long line of Trump-nominated climate skeptics. In an interview, Craft said she respects “both sides of the science” of climate change. Imagine our surprise, given that her husband is the CEO of the “third-largest coal producer in the eastern United States.” The Crafts are also gold-level members at the Trump International Hotel in Washington, D.C, and, per ThinkProgress reporting, have stayed at the hotel at least 20 times.

Craft fits right in to the Trump administration’s pay-to-play operation. Reporting from Axios this morning shows that “the U.S. ambassadors appointed by Trump have given more financial support to his election than any cohort of ambassadors in recent history, even as they demonstrated fewer qualifications for the job.”

THE EMERGENCY THAT ISN’T.

The House will vote tomorrow to block this illegal, unpopular declaration.

Speaking of pay-to-play politics: Trump promised on the campaign trail to lower drug prices. As President, Trump met with Pharma executives and mysteriously changed his mind about drug pricing. Then, Big Pharma received billions in tax cuts from the #GOPTaxScam.

Tomorrow, six Pharma executives, including the CEO of Pfizer, will testify before the Senate Finance Committee about the sky-high drug prices in this country. Tune in to hear them answer for their corruption.