Another betrayal of America

If this week’s whistleblower chaos proves one thing, it’s that Trump is again putting his personal and political interests ahead of our country’s.

The Washington Post and The New York Times reported that the whistleblower complaint about Trump involves “multiple actions” and directly involves Ukraine. The complaint, which Trump’s DOJ and the White House are trying to withhold from Congress, reportedly involves a “promise” Trump made to a foreign leader.

Trump spoke with the Ukrainian president just weeks before the complaint was filed, and now his administration is again blocking the disclosure to Congress required by law. Meanwhile, his personal attorney admitted to asking Ukraine to open an investigation into former Vice President Joe Biden, one of Trump’s top political opponents, a potentially illegal act in itself.

The Washington Post’s editorial board suggested weeks ago that Trump’s decision to withhold key military aid from Ukraine was an attempt “to force Mr. Zelensky to intervene in the 2020 U.S. presidential election by launching an investigation of the leading Democratic candidate, Joe Biden.”

Share this clip to spread the word: Trump is abusing his office for personal and political gain while America’s interests are shoved aside. 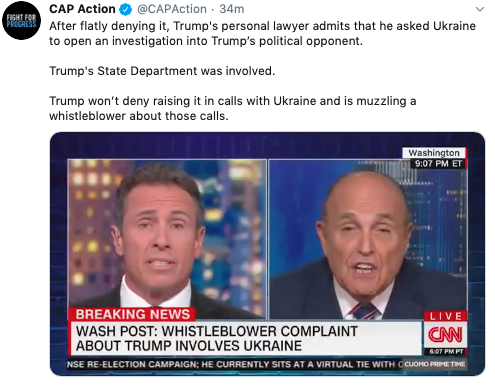