Back to the scene of his lies

Trump promised to save jobs in Michigan. He lied.

Trump’s back in Michigan tonight, and he’s hoping the people of Michigan have forgotten his false promises from the 2016 campaign trail. Lucky for him, we haven’t, and we put together a highlight reel of Trump’s biggest lies to prove it.

Ahead of Trump’s campaign rally in Grand Rapids, Michigan, share this video on Facebook and Twitter to make sure he can’t get away with more lies. 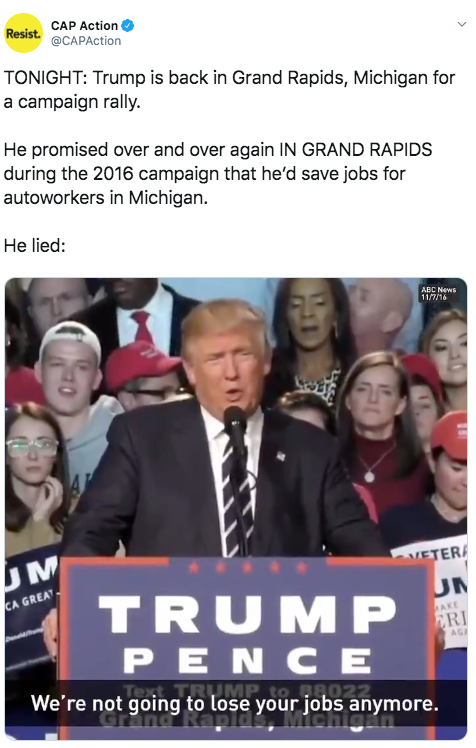 You can bet that Trump will perform his usual stump speech of self-praise and attacks on Democrats. He’ll peddle more lies about his “accomplishments” and (wrongly) crow about how the Mueller report exonerated him (it didn’t).

What he won’t mention?

The Mueller Report with Judd Legum

On this week’s episode of Thinking CAP, Popular Information founder and former ThinkProgress editor-in-chief, Judd Legum, helps break down the fallout from the non-release of the Mueller report and the spectacle that has consumed the nation for the past week. Listen here.