Then he refused to show up to his next hearing

After Attorney General Barr’s abysmal, dishonest performance in yesterday’s Senate hearing, he decided not to show up for his scheduled appearance before the House Judiciary Committee.

Mueller’s letter criticizing Barr’s manipulation of his findings is proof that Barr lied to Congress—and, as Speaker Pelosi said this morning, “That’s a crime.”

Share this clip on Twitter to spread the word: Barr has repeatedly lied to Congress and the public. It’s time to hear directly from Robert Mueller. 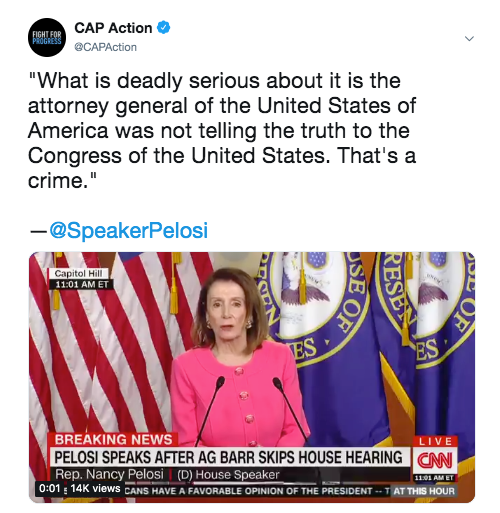 Barr was slated to appear before House Judiciary this morning to discuss his handling of the Mueller report. But last night, Barr sent notice to Chairman Jerry Nadler (D, NY-10) of his refusal to appear. Why? Because Nadler planned to have committee lawyers question Barr.

(If that sounds familiar, it’s probably because Senate Judiciary Committee Republicans called in an independent prosecutor to question Dr. Christine Blasey Ford last fall. She didn’t have the luxury of not showing up.)

Nadler went no holds barred in his condemnation of the AG: “He has not only misrepresented the findings of the special counsel…He has himself unfairly attacked the special counsel’s investigation…We didn’t choose not to have Mr. Barr come. He chose.”

For the first time in ten years, the House voted on and passed a bipartisan bill to combat climate change.