It’s time for you to raise your voice.

The Senate Judiciary Committee must halt Kavanaugh’s confirmation vote until Dr. Ford’s voice can be heard publicly, fairly, and in full. 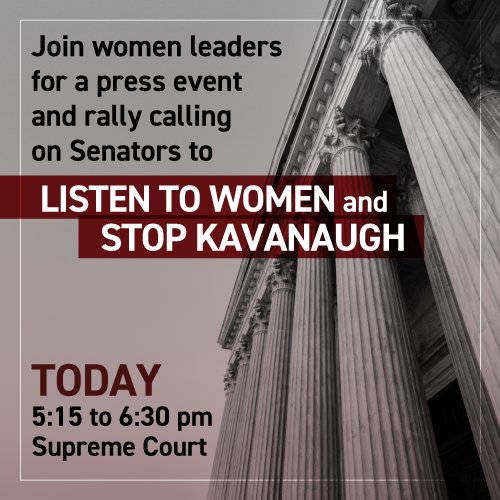 Head to the Supreme Court today at 4:00p to let our senators know #WhatsAtStake. Then, join women leaders at 5:15p to demand the Judiciary Committee delay the vote immediately.

If you aren’t able to participate in person, tune in to @CAPAction.

LET HER BE HEARD.

Trigger warning: the following contains sensitive material about an account of sexual assault.

Dr. Ford courageously relayed the incident to some Democratic lawmakers upon learning that Kavanaugh was on the shortlist for the nomination, with the express wish to remain anonymous. After her privacy was invaded this past weekend, Ford decided to come forward.

Her story was corroborated by years-old notes from her therapist, and the Washington Post noted that she first reached out to them before Kavanaugh was even settled on as the nominee. Ford even took the extreme step of volunteering for a lie-detector test, which she passed.

Any attempt to dismiss her story is unacceptable. We need the Senate Judiciary Committee to delay the vote and ensure an opportunity for a full investigation of the facts.

Yet, Chairman Grassley made it his mission from the start to obscure details of Kavanaugh’s nomination from the public, withholding 96% of the judge’s records under the guise of confidentiality.

The attempt to rush Kavanaugh into a lifetime seat while hiding the truth about him has to stop, and it has to stop now.

Ford’s story received a range of feedback from elected officials. Democrats are calling to delay Kavanaugh’s committee confirmation vote until Dr. Ford is heard. Senators Flake and Graham said they wanted to hear more from Ford. Murkowski and Corker also expressed misgivings about allowing the vote to proceed without delay.

Republican Chairman Grassley of the Judiciary Committee released a statement essentially calling the account a Democratic political tactic to impede the nomination and touting the letter of support the committee organized from 65 of Kavanaugh’s female high school contemporaries.

As of this morning, only 2 of those 65 women said they still stood by Kavanaugh.

Conservative news anchor Megyn Kelly laid out the defense that will doubtlessly be used by many Republicans: “It’s been 34 years. He was allegedly 17 when it happened. How is he supposed to defend himself?”

It doesn’t matter if the assault happened in high school. If you are credibly accused of sexual assault, you should be disqualified from a lifetime appointment to the Supreme Court of the United States.

Until Dr. Ford’s brave testimony is publicly and fairly heard, we must delay the vote to confirm Brett Kavanaugh to the Supreme Court.

Stand up tonight. Speak out.