Trump asked Native Americans, “What do you have to lose?”

The answer? Everything, because of Trump’s broken promises that hurt every American.

Trump promised to protect health care for all Americans. His administration has broken that promise countless times with efforts to rip away health care in Congress and in the courts, putting quality, affordable care at risk for millions of families.

Native Americans around the country—including tribes like Amber’s in Schurz, Nevada—are paying the price with their health. 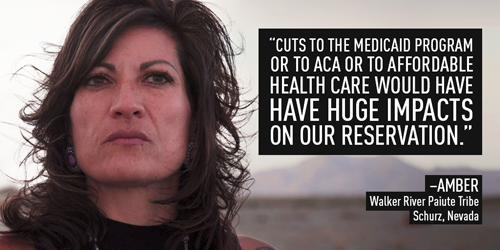 Trump skips being president, goes with racist tweets instead

Previous presidents made some effort to actually spend their days working for us, the American people. That’s not Trump’s cup of tea, so instead he’s spent another several days completely fixated on racist tweets against Members of Congress:

Dan Coats out as intelligence chief, to be replaced by a Trump enabler

Director of National Intelligence Dan Coats was one of the few officials to fact-check Trump’s dangerous lies and warn the public of the serious threat Russia’s attacks pose to our democracy. Most recently, the White House edited out Coats’ harsh condemnation of Russia for their attempts to interfere in 2018. For his patriotism, he earned a frosty relationship with Trump and now, the loss of his job.

His replacement, Rep. John Ratcliffe (R-TX), is a partisan Trump apologist and an outspoken critic of the Mueller investigation. If confirmed, Ratcliffe will be the least qualified DNI since the office’s inception.

At a time when Trump is actively inviting foreign governments to interfere in our elections, we need intelligence officials who stick to the facts and are willing to stand up to Trump’s lies—not enable them. Ratcliffe is unfit to serve as director of national intelligence.