“You can’t lie your way onto the Supreme Court.” 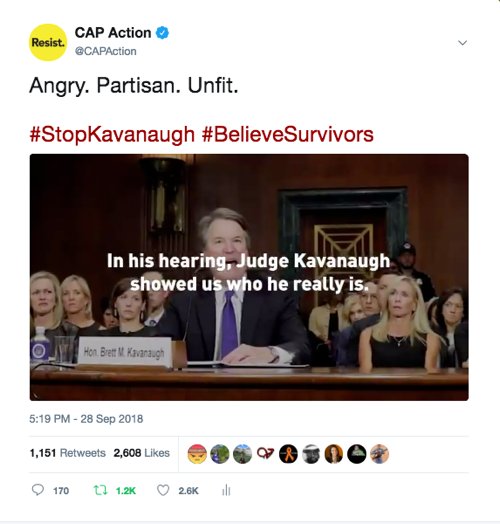 Multiple new articles detail Kavanaugh’s repeated lies to the Senate Judiciary Committee. The New York Times detailed some of the false and misleading statements Kavanaugh gave during his testimony, including heavily disputed claims about his drinking habits and his statement that Dr. Blasey Ford’s allegation was “refuted” by others she said were there (it was not).

His claim that he had no connections to Yale University prior to attending? False: His grandfather attended Yale and is buried in New Haven.

Kavanaugh’s insistence that his entire young life was dedicated to “service projects,” “academics,” and friendship? His calendar would strongly suggest otherwise.

His claim that he never experienced memory lapses or blackouts due to drinking? This is bluntly disputed by several of his contemporaries and friends from college.

The list of lies goes on and on and ranges from the drinking age in Maryland to alleged involvement with stolen documents. As a Yale classmate of Kavanaugh’s said: “He’s trying to paint himself as some kind of choir boy…You can’t lie your way onto the Supreme Court.” We’re not buying it.

After his angry, partisan, and untruthful display last week—along with the fact that he faces three credible allegations of sexual assault—why should anyone trust Judge Brett Kavanaugh with a seat on the highest court in the land?

One year ago today, tragedy unfolded in Las Vegas. In the worst mass shooting in modern American history, 58 people were killed and more than 400 injured, leaving a devastating and indelible mark on the community. Today, the country remembers.

Gun violence, like health care and the GOP tax bill, will be a key issue during the midterm elections. New polling from a leading gun violence prevention organization and one of the largest national teachers unions found:

The survey also suggests that these stances and concerns could be prominent at the ballot box come November. Will the Trump Administration and Republican-led Congress’ failure to take action after Las Vegas, Santa Fe, Parkland, and more be a deciding factor for American voters?

Last week, at the annual Smart On Crime Innovations Conference—an annual convening to change the criminal justice system to be fairer and more just, comprehensive, and effective—the pod was joined by Valerie Jarrett, formerly the senior adviser to President Barack Obama, and Michael Tubbs, the 28-year-old mayor of Stockton, California.

Mayor Tubbs offers his personal philosophy for how leadership at the local level can move the needle on criminal justice reform, and Jarrett provides her take on the ongoing sexual assault allegations against Judge Brett Kavanaugh and what they portend for the future of the Supreme Court and the country. Listen to the episode here.