There is already clear evidence suggesting that the Trump campaign colluded with Russia during the 2016 election. So why did Senate Intelligence Chairman Richard Burr (R-NC) mislead the American people when he recently said that “we don’t have anything that would suggest there was collusion by the Trump campaign and Russia”?

Maybe the senator is confused. We can help him out. Here are 5 clear examples of collusion, as identified by the Moscow Project: 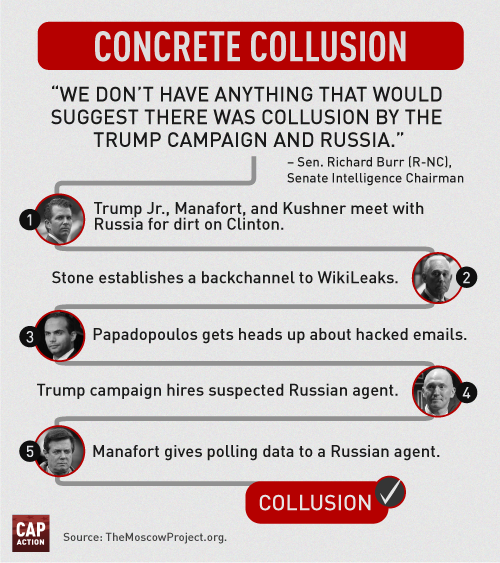 On February 18th, the last of the nation’s millionaire earners will stop contributing to Social Security for the entire year, even though 94% of Americans contribute all year long.

Why? Here’s the deal:

Lifting the payroll tax cap would not only require the richest Americans to contribute their fair share, but would also allow Social Security benefits to be expanded at a time when many families struggle to save for retirement and pensions are increasingly a thing of the past.

That’s why Senate Democrats just introduced the Social Security Expansion Act, which would “subject any income above $250,000 to the existing 12.4% Social Security payroll tax.” The bill, which is also being introduced in the House, would also increase Social Security benefits, “with low-income seniors receiving a boost of nearly $1,300 a year.”

The American public overwhelmingly favors expansion of this vital program. Meanwhile, President Trump—who ran on a promise not to cut Social Security—has called for a whopping $72 billion in cuts to the program in his fiscal year 2019 budget.

Senate Republicans have been Trump’s rubber stamps in his crusade to stack the courts with Trumpian, conservative judges. Now, they want to help him ram nominees through even faster.

Next to tax cuts for the wealthy, judges who will automatically side with corporations instead of the people are the best way that Republicans can rig the government and the economy for their wealthy donors.

A new GOP proposal would limit debate time on Trump’s district court judicial nominees from 30 hours to as little as 2 hours. These are lifetime appointments, and Republicans want to end a thorough vetting process because they know that Trump’s nominees have overwhelmingly alarming records on civil and human rights issues. Now, they want to turn up the speed on the assembly line so that their nominations can’t even be fully inspected.

See a full statement from the Center for American Progress here.