Trump and Senate Majority Leader Mitch McConnell could do something about it today, but they won’t—not unless we make it clear that they don’t have a choice. Our lives are worth more than NRA blood money.

Enough is enough. Share this graphic on Facebook and Twitter to spread the word: This is a uniquely American problem, and it’s time for the Republican-led Senate to act. 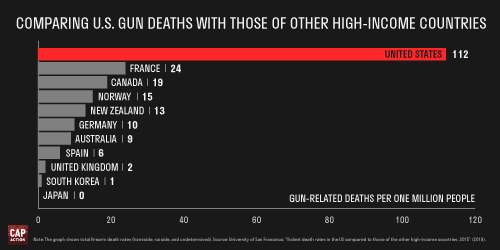 The gun murder rate in the U.S. is 25 times higher than in other high-income nations. As the Center for American Progress pointed out, “every other developed nation in the world does a better job of protecting its people from gun violence.” Here are a few steps Congress could take right now to make our country safer: