“I worry about having to make decisions between paying the electric bill and paying for a medication that keeps me alive.”

For many Americans like Alicia, a brain cancer survivor from Arizona, this is a constant fear. And for many people, affordable coverage is only made possible by the protections in the Affordable Care Act.

Just today, we learned that the lawsuit filed by Texas, and backed by Trump and Attorney General Bill Barr aimed at tearing down the ACA will be heard in the 5th Circuit on July 9. If they succeed in court, the entire law would be tossed out, leaving millions of Americans like Alicia in danger of losing their coverage. 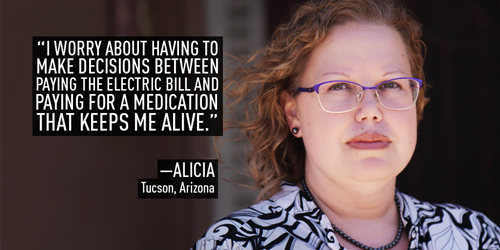 Trump promised to protect people with pre-existing conditions. Instead, he’s spent his presidency trying to rip health coverage from millions of families.

More than 1 million Americans have become uninsured since Trump took office. At the same time, premiums are increasing and health care CEOs continue raking in huge profits—$2.6 BILLION in 2018, to be exact.

Rather than do anything to help working Americans struggling to afford care, Trump is continuing his attacks on the Affordable Care Act and refusing to work with Congress on any productive legislation until they abandon their Constitutional oversight duties.

In other words: He’s blackmailing Congress and using the American people as leverage, while asking the GOP-packed courts to do his dirty work.

What you missed during Trump’s temper tantrum