Prepare for the Twitter temper tantrum. Judge Andrew Napolitano, a legal expert from Trump’s beloved Fox News, explained exactly how he believes Mueller’s redacted report implicates Trump in obstruction of justice—and why Attorney General Barr was wrong to exonerate him.

Trump is clearly scared of what’s in Mueller’s report. Now, he’s refusing to cooperate with House investigations and blocking former White House Counsel Don McGahn from responding to a subpoena to testify. Why? What is Trump afraid of?

Share this article on Facebook and Twitter to make it clear: Mueller’s report shows Trump obstructed justice—and now he’s trying to cover up his lies again by obstructing investigations into his corruption. 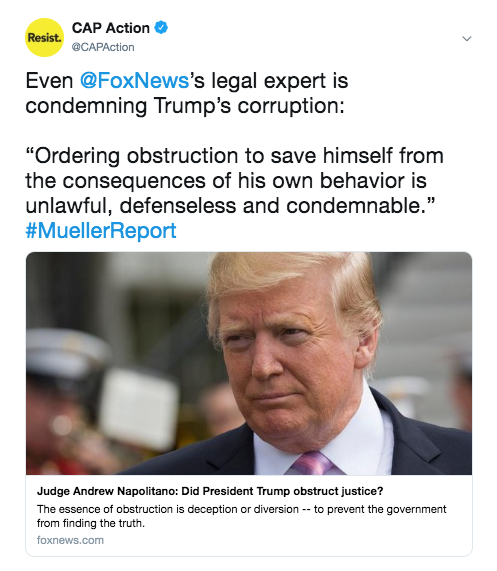 Trump is obviously panicked by the prospect of McGahn testifying. Here are a few reasons why:

It’s only been a week since Mueller’s redacted report became public. If it feels like it’s been a month—and if the report left you with more questions than you had before—you’re not alone.

That’s why the Thinking CAP team brought in Max Bergmann, CAP senior fellow and director of CAP Action’s Moscow Project, to walk us through the report. Bergmann explains how the report outlines extensive collusion between the Trump campaign and Russia and serves as an impeachment referral to Congress. Listen to the episode here.