Republican senators are still refusing to call for witness testimony and evidence in the impeachment trial, despite John Bolton’s willingness to testify if subpoenaed and mounting evidence against Trump. Some senators are even attempting to dismiss the impeachment case before a trial can take place.

So far, Senator Mitt Romney is the only Republican senator to say that he’d like to hear from Bolton, but he refused to commit to subpoenaing Bolton’s testimony.

As The Washington Post’s Ruth Marcus argued yesterday: “Why would any senator charged with…trying the president on articles of impeachment not want to hear Bolton’s account? How could any senator justify refusing to hear from someone so central to Trump’s handling of Ukraine?”

The answer: They can’t. If Republican senators don’t call for witnesses and evidence in the impeachment trial, they’re covering up Trump’s crimes. 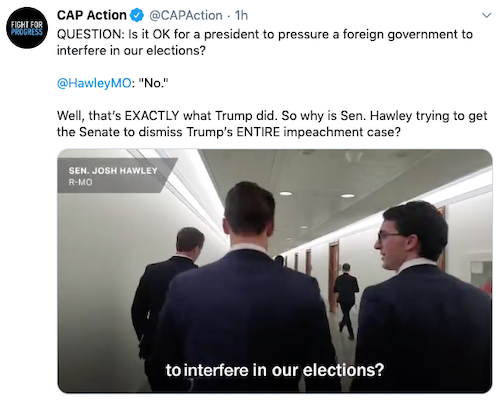