Step 1: Add $2 trillion to the deficit with a massive giveaway to the wealthy, corporations, and donors.

Step 2: Decide the deficit is too high, and, naturally, that it’s time to cut Social Security and Medicare.

As we said yesterday, we don’t have to guess what Republicans will do if they maintain total control of Congress for another two years; we already know. 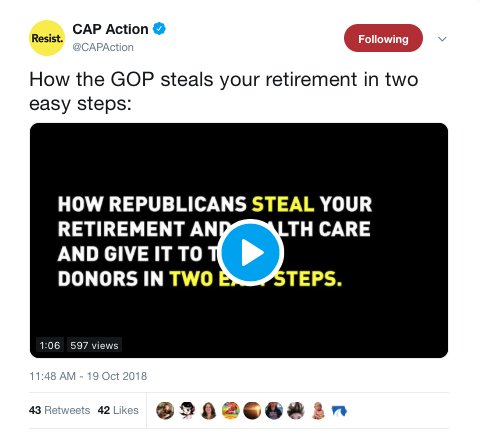 With just 18 days until Election Day, increasingly desperate Congressional Republicans are showing their true colors. Some are dusting off old smears about “open borders” and “sanctuary cites,” while others have crossed the line and gone full White Nationalist.

Here are just a few disgusting examples from this week:

The latest on the voter registration goat rodeo in Georgia; inside Ben Carson’s plot to stop HUD from fighting housing segregation; the toll toxic media coverage on Kavanaugh is taking on survivors one year after the launch of #MeToo, plus the news of the week ICYMI. Check out the episode here.