“If we had had confidence that the president clearly did not commit a crime, we would have said so.”

Mueller’s press conference two weeks ago was a message to Congress: The ball is in your court. House Democrats are heeding that call.

The Mueller report did NOT exonerate Trump. Rather, it makes a damning case that he and his inner circle obstructed justice and encouraged an attack by a hostile foreign government. It’s an impeachment referral to Congress, and House Democrats are taking up the mantle today.

Watch at 2pm ET as the House Judiciary Committee continues investigating Trump’s crimes during their hearing, “Lessons from the Mueller Report: Presidential Obstruction and Other Crimes.”

Share Mueller’s message to Congress ahead of today’s House Judiciary hearing, then tune in at 2pm ET: 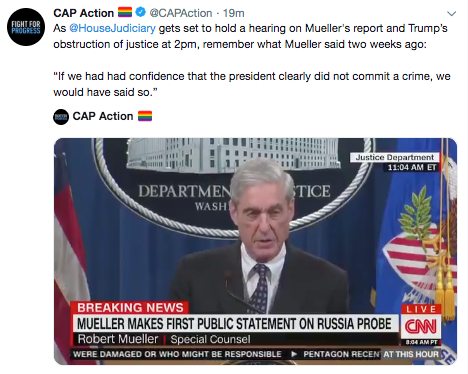 Here’s what you need to know before today’s hearing:

Pride Month is more important than ever

In the face of the Trump administration’s relentless attacks on LGBTQ+ people, Pride Month is more important than ever. Share this tweet thread to explain why.

From health care to military service to housing access, the story of the Trump administration is one of fear and erasure and contempt. Trump’s hateful, anti-LGBTQ+ agenda poses a grave threat to millions. Here are just a few examples:

Advocates and lawmakers continue to fight tirelessly against this dangerous hatred, and they’re making important advances across the country. Pride Month is a celebration and a recognition of the fact that LGBTQ+ people have to fight for their rights on a daily basis.

Every day, and at Pride events across the country this month, we stand with the LGBTQ+ community.