Trump must be held accountable for his impeachable abuses of power

This morning, the House of Representatives announced that it will introduce two articles of impeachment against Trump: abuse of power and obstruction of Congress.

Trump abused the power of his office to deprive Americans of a free and fair election in 2020—and it’s the duty of every single member of Congress to uphold their oaths of office and hold him accountable. 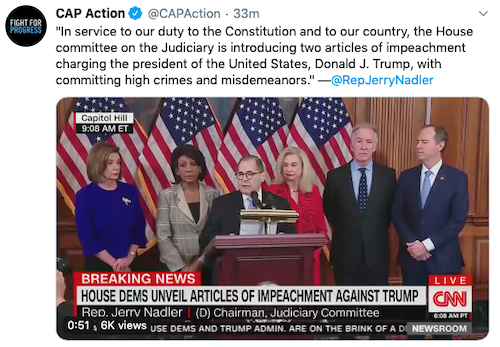 As Center for American Progress president and CEO Neera Tanden said in a statement this morning:

“By using the power of his office to extort a foreign country into interfering in our elections, Trump sought to deprive Americans of a free and fair election in 2020. The U.S. House of Representatives has undertaken a meticulous impeachment process, and now it must act—for the sake of our democracy now and in the future.”