On Iran, even GOP senators are alarmed

Trump’s Iran policy is so dangerous and incoherent that even Republican senators lambasted the administration after a briefing on the Soleimani killing yesterday.

There’s a clear next step: It’s vital that Congress pass a war powers resolution to limit the Trump administration’s actions on Iran. Such a measure would help restore Congress’ constitutional role in declaring war and limit Trump’s ability to act unilaterally without consulting Congress (as he did last week).

This isn’t a partisan issue; it’s about the national security of our country. With a war powers resolution, Trump’s White House would have to make the case to Congress before any further attacks. The House plans to vote on the measure today, and the Senate must follow suit as soon as possible.

Trump’s attack on Iran has made Americans—and the world—less safe. This resolution is an important step toward reining in Trump’s chaos.

Share this video to spread the word: Congress must put a check on Trump’s dangerous policies. 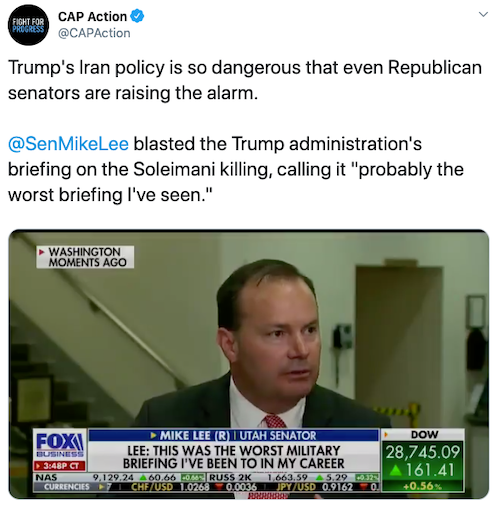