Job growth is down 12% under Trump

Despite Trump’s constant assertions that he’d be “the greatest jobs president that God ever created,” today’s jobs report was dismal.

In fact, you don’t have to look too far to find a better jobs president than Trump. Job growth under Trump is down nearly 12% from under President Obama.

Trump inherited a strong economy from Obama, and he’s putting that economy at serious risk with his erratic trade-wars-by-tweet. 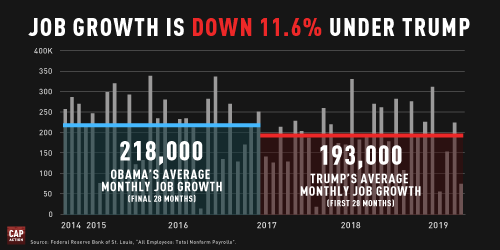 In stark contrast to Trump’s tweet tantrums and bloviating lies, progressive leaders are churning out policy ideas that will make a positive difference in the lives of working Americans: