Job growth down 15% under Trump

Today’s jobs report once again debunks Trump’s claim that he’s “the greatest jobs president that God has ever created.”

Hate to break it to him, but Trump isn’t nearly as great of a jobs president as his predecessor. Per today’s report, job growth under Trump is down 15% from under President Obama. Worse yet, reports show manufacturing in the Midwest beginning to contract, the tiny economic boost from Trump’s tax cuts has already ended, and layoffs continue from big corporations that received those tax cuts. 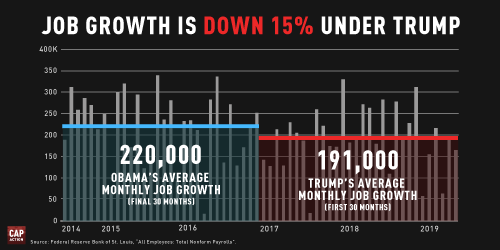