Senators have a clear choice to make

Last week, senators swore an oath to do “impartial justice” in the Senate impeachment trial. But this week, Senate Majority Leader Mitch McConnell introduced draft trial rules that would block all witnesses and evidence.

Why? To cover up Trump’s crimes.

A trial without witnesses and evidence isn’t a trial at all; it’s a cover-up. Senators know this, and so does the public. That’s why 71% of Americans want to hear witness testimony from people with first-hand knowledge of Trump’s abuse of power and obstruction—and why the majority of Americans want the Senate to convict Trump and remove him from office.

At the start of Trump’s impeachment trial this afternoon, Senate Republicans have a choice to make: uphold their oath to do “impartial justice,” or cover up Trump’s crimes. 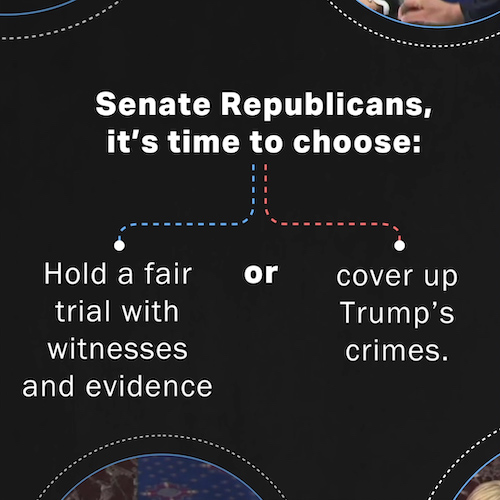