Meet the new faces of Congress.

Today, in contrast to Trump’s desperate campaign of fear, hatred and division, America elected a new generation of Democratic leaders who reflect the diversity of the entire country more than ever before.

In contrast to the Republican #CultureOfCorruption, America elected candidates who rejected corporate PAC donations and ran on an inspiring vision to make government work for the people again.

To send a message to a President who has tried to reduce our democracy to a tool of his personal corruption, Americans used their democracy to replace his lackeys in Congress with bold new leadership that will finally put a check on him.

We’ll know more tomorrow, but as of right now here’s what some of the new faces of the United States House of Representatives will look like: 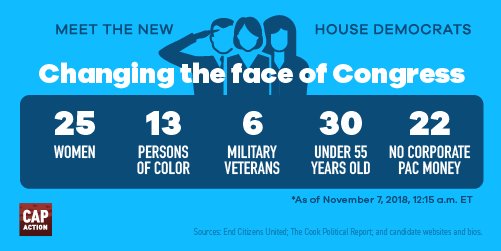