And he wonders why people gave him a new nickname

When every U.S. intelligence agency tells you that a hostile foreign power attacked our 2016 elections and is actively working to attack our elections in 2020, the logical, patriotic response would be to secure our elections, right?

Not if you’re Mitch McConnell. The day after special counsel Robert Mueller warned the nation of the ongoing Russian threat, McConnell blocked two bipartisan election security votes in the Senate.

Why? Because he helped allow Russian interference in 2016, and McConnell has done everything in his power to protect Trump from accountability for his campaign’s collusion with Russia. Moscow Mitch is mired in corruption, and he’s willing to compromise our democracy to protect Trump, advance his agenda, and fill his own campaign coffers. 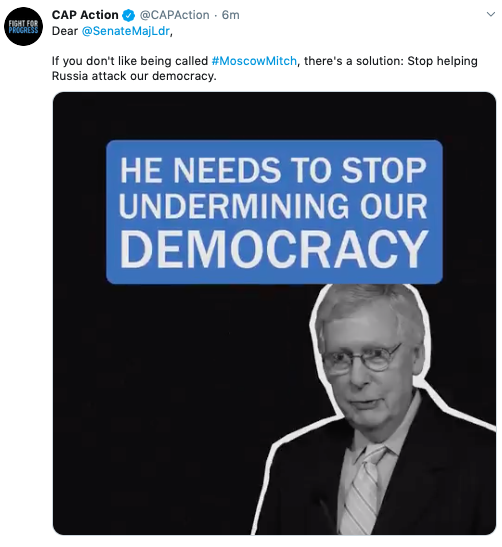 It’s not just election security. McConnell is blocking critical bills that would reduce gun violence, offering nothing but “thoughts and prayers” and capitulation to his NRA donors after last weekend’s mass shootings in El Paso and Dayton.

He’s sabotaging American health care, preventing passage of bills to close the gender pay gap, combat climate change, lower prescription drug costs, and more—all of which have passed the House and are ready for a Senate vote. Americans deserve better.