Too much of a liar for Trump.

Some Republican leaders—including even notorious liar President Donald Trump—are endorsing a new standard: It’s not acceptable to lie to Congress.

Will they hold to that standard with Supreme Court nominee Brett Kavanaugh?

Senator Jeff Flake said the nomination is over if the FBI probe finds that Kavanaugh lied. President Trump today said “I don’t think you should lie to Congress…For me, that would not be acceptable.”

Even before there are conclusive results from the FBI probe, we already know that Kavanaugh lied under oath (at least 29 times, in fact).

Last night, his mistruths were exposed once again. Kavanaugh told the Judiciary Committee that he first heard of Deborah Ramirez’s sexual assault allegation after it was published in the New Yorker in late September. Reports from yesterday show that Kavanaugh was asking classmates to refute the claim before it ever became public.

Need more proof that Kavanaugh repeatedly misled the Committee and the public during his confirmation hearings? Watch this video and share on Facebook: 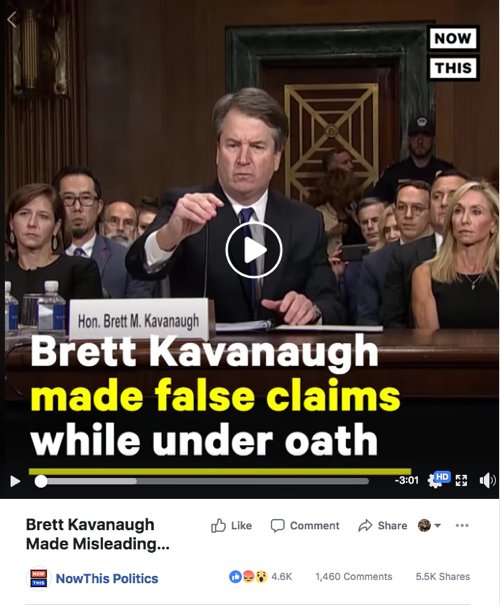 Over the past few weeks, nearly 2,000 migrant children around the U.S. were woken in the dead of night and shipped off to a tent city in the West Texas desert.

There, they are living 20 to a tent, sleeping in long rows of bunks, and receiving no formal schooling and limited access to legal services. They are among the over 13,000 unaccompanied migrant children currently in government custody as a result of policies adopted by the Trump administration to make it more difficult for a family member or other appropriate sponsor to take custody of the child.

As hundreds of children remain separated from their parents, a damning new report by the Department of Homeland Security Office of Inspector General finds that the Department lied for months when it claimed publicly that it developed a “central database” that could be used to reunite families. A new Inspector General report “found no evidence that such a database exists.” The report also found that one-third of the children separated were held in Border Patrol custody for longer than the 72 hours permitted by law, with some held for 8, 9 and even 25 days.

The administration’s immigration priorities are all part of Stephen Miller’s sick fantasies, but the American people aren’t on board.

As we head into the midterms, Republicans are struggling to find a platform of achievements on which to run. Since all they have to show for the past eighteen months is a disastrous attempt at Obamacare repeal and a $2 trillion tax bill for the rich, Republicans are resorting to attacking Democrats on immigration. It’s proving particularly ineffective.

Inside Trump’s “public charge” attack on immigrant families with the Protecting Immigrant Families campaign; Jocelyn Frye on how little has changed since Anita Hill; and Jeremy Slevin returns with the news of the week. Listen to the episode here.