If there’s one crystal clear takeaway from yesterday’s hearing on the Mueller report, it’s this: Donald Trump intentionally committed obstruction of justice, and if he weren’t president, he’d be facing multiple felony charges.

Despite Trump’s lies, despite his hand-picked attorney general’s cover-up, despite his Congressional allies’ willingness to obstruct and lie for him, Trump is in trouble.

Mueller’s report speaks for itself, as the special counsel himself said it would, and it tells the story of a candidate and team who committed multiple crimes in pursuit of the most powerful office in the world—then committed more crimes to cover those up.

Share this clip to demand action: Mueller’s report details Trump’s crimes. Now, it’s Congress’s job to investigate them and go where the facts take them, because no one—not even the president of the United States—is above the law. 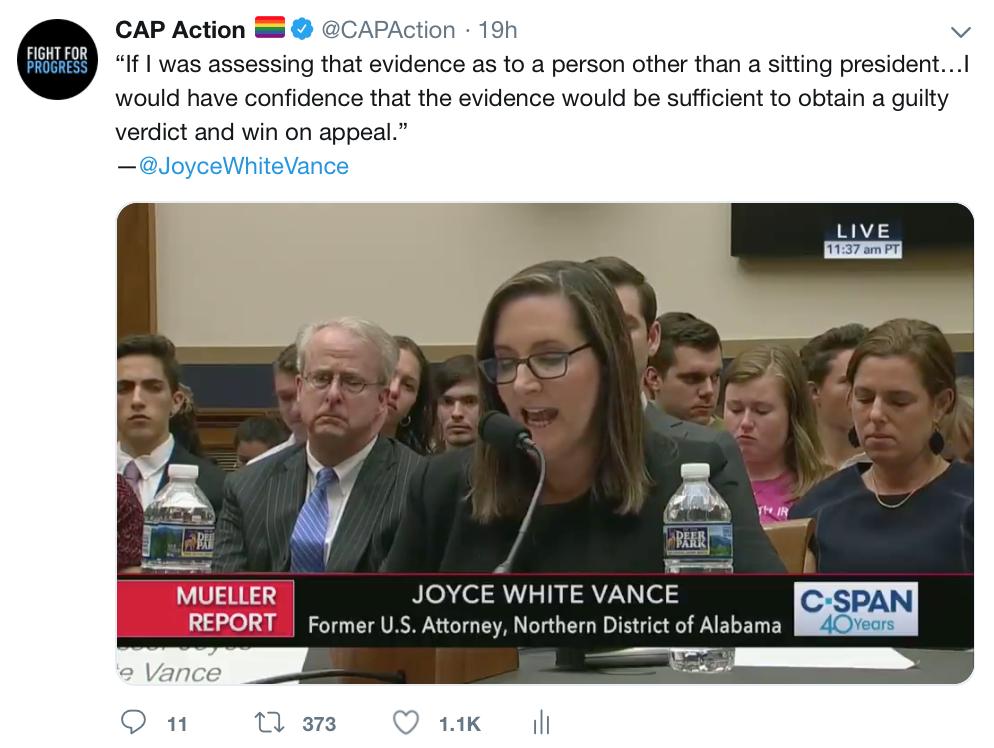 As CAP Action’s Moscow Project put it on the day it was finally released, “The Mueller Report, like the Watergate Roadmap, Should be Considered an Impeachment Referral.” The witnesses yesterday agreed.

Chairman Jerry Nadler closed yesterday’s hearing with this: “This is not a bogus investigation of a false allegation, but a necessary investigation of a threat to our country and liberty. This committee and this Congress have an absolute obligation to the American people to investigate this.”

House Democrats’ investigations into Trump’s crimes continue tomorrow, as Chairman Adam Schiff leads the House Intelligence Committee’s hearing on “Lessons from the Mueller Report: Counterintelligence Implications of Volume 1.” Tune in at 9am EST.