No toothbrushes, soap, or sleep

Children are being held in “filthy, overcrowded, and increasingly dangerous conditions”

The Trump administration’s treatment of migrant children in its custody is nothing short of child abuse.

Attorneys who work with migrant children visited two Border Patrol detention camps, where they found hundreds of children being held in “filthy, overcrowded, and increasingly dangerous conditions.” Forced to sleep on mats on a concrete floor, denied soap and toothbrushes, and forced to care for one another, these children are being wildly mistreated in U.S. custody. 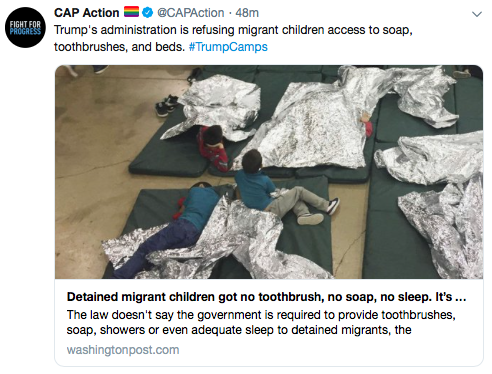 Immigrant families and migrant children are nothing more than political pawns to Trump. He’s ripping families apart and detaining children for the sole purpose of inflaming his base. Just days after he launched his re-election campaign, Trump threatened raids designed to deport (and, in some cases, separate) immigrant families. He’s showing no remorse for the chaos and pain caused by his family separation policy, or the hundreds of children suffering in U.S. custody, and instead is using families as pawns in his anti-immigration agenda.

As the New York Times Editorial Board wrote today, “There’s no excuse for mistreating children at the border.” Read their piece to learn about what you can do to help end the abuse of these children.