Like so many Dreamers, Estefania came to the U.S. at three years old. This is the only home she’s ever known. It’s where her family is, where she’s earning her masters degree, where she pays taxes and goes to work—where her life is. The Trump administration’s cruelty could take it all away.

Trump said that Dreamers “shouldn’t be very worried…We’re going to take care of everybody.” Instead, his administration repealed DACA two years ago today, leaving hundreds of thousands of Dreamers like Estefania living in fear of deportation. Each year DACA recipients and their households pay $8.8 billion in federal, state, and local taxes, and pump billions of dollars back into their local communities; the uncertainty surrounding DACA puts this large economic activity at risk.

The House already passed a bill to protect Dreamers. H.R. 6—like so many other pieces of legislation—is sitting on Senate Majority Leader McConnell’s desk, collecting dust as people in this country suffer. 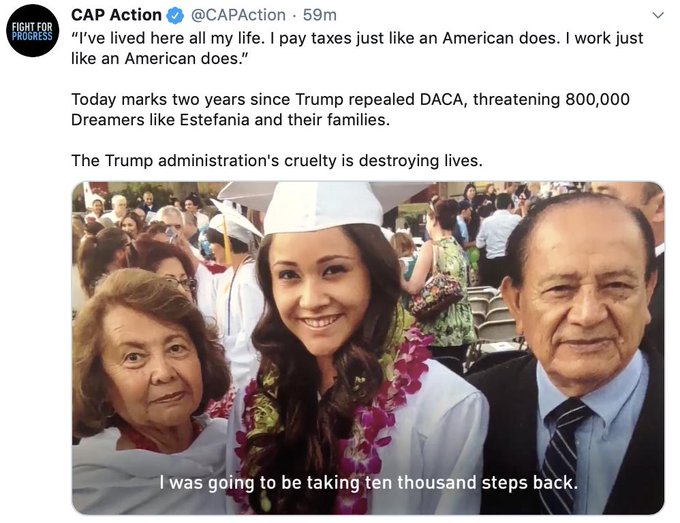 As Dorian lashes the Carolinas, Trump plays with markers

Hurricane Dorian is currently pounding the Carolinas, leaving hundreds of thousands without power and at risk of dangerous flooding.

And what’s Trump doing? Tweeting and doctoring hurricane maps with markers, of course. After defunding FEMA’s disaster relief fund last week to pay for his cruel immigration agenda, Trump is spending his day defending his repeated false claims that Alabama was in the storm’s path. This is after he altered an official National Weather Service projection to show Hurricane Dorian heading toward Alabama and the Gulf of Mexico.