During his trip to Japan this weekend, Trump spent his time attacking his political opponents on Twitter and ignoring the concerns of his allies about recent North Korean missile launches rather than focusing on the important U.S.-Japan relationship.

In direct opposition to his own national security adviser and contrary to the views of his host, Japanese Prime Minister Shinzo Abe, Trump said he’s not “personally bothered” by North Korean missile launches. He then agreed with Kim Jong Un’s assessment that former Vice President Joe Biden (one of Trump’s potential 2020 opponents) is a “low IQ individual.” Why is Trump spending time on foreign soil siding with a murderous North Korean dictator over our allies and his fellow Americans?

This is outrageous and unprecedented. Trump’s penchant for praising hostile foreign dictators should alarm everyone—Democrats and Republicans alike. 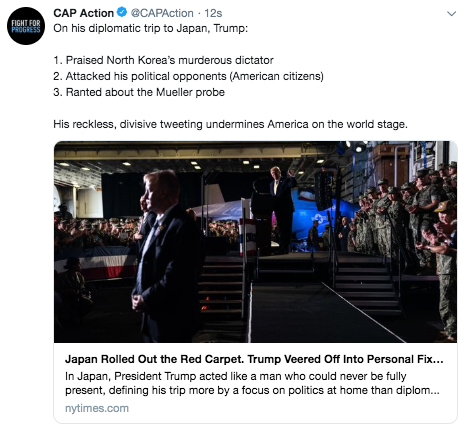 One more time for the folks at the back: No one is above the law

Despite what Trump’s associates think, Trump and his team are not above the law. A few reminders: