Trump promised not to cut Medicaid—a promise his administration is doing its best to break.

The Trump administration proposed deep cuts to Medicare, Medicaid, and Social Security and is currently backing a federal lawsuit to repeal the Affordable Care Act, threatening coverage and protections for 134 million Americans with preexisting conditions.

For families like Casey Dye’s, whose daughter relies on Medicaid for health coverage, these broken promises have dangerous consequences. 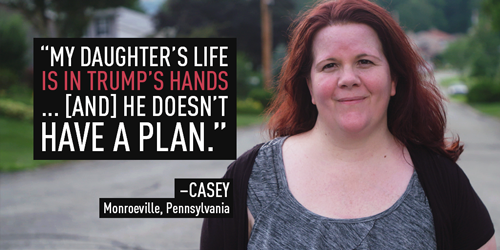 Trump and the whistleblower complaint, explained

Trump and his loyal attorney general, Bill Barr, are again keeping the American people from learning the truth, this time on a whistleblower complaint about a troubling interaction between Trump a foreign leader.

The whistleblower complaint, which the House Intelligence Committee is currently battling to access, came after Trump made a “promise” to an unnamed foreign leader that “was regarded as so troubling that it prompted an official in the U.S. intelligence community to file a formal whistleblower complaint.” As the Moscow Project noted, it’s no surprise that Russian President Vladimir Putin’s name tops the list of possible foreign leaders, given Trump’s history of advancing Putin’s interests.

Trump’s acting Director of National Intelligence refuses to disclose the complaint to the House Intelligence Committee, a decision we recently learned was made on the advice of the DOJ Office of Legal Counsel—a.k.a. Attorney General Barr. CNN is also reporting that the White House is directly involved in advising the DNI not to release the complaint.

Trump and Barr have worked to hide damaging information about Trump from the public before; remember that the fight for the unredacted Mueller report and underlying evidence is still raging on. What are they hiding now…and why?