Senate Republicans: Do your jobs

When asked if Trump’s campaign established a dangerous precedent of accepting campaign assistance from hostile foreign powers, this was Mueller’s response: “I hope this is not the new normal. But I fear it is.” (Remember that Trump gave a standing invitation for foreign interference in our elections just a few weeks ago.)

One day later, the bipartisan Senate Intelligence Committee released a terrifying report detailing the extent of the Russian effort to influence the 2016 elections with attacks on election infrastructure in all 50 states.

This report should scare every American. The Senate should have held a vote two years ago to defend our democracy. Instead, Majority Leader McConnell has blocked two election-security votes in the last two days alone. Any Senator who doesn’t demand McConnell hold a vote immediately is complicit. 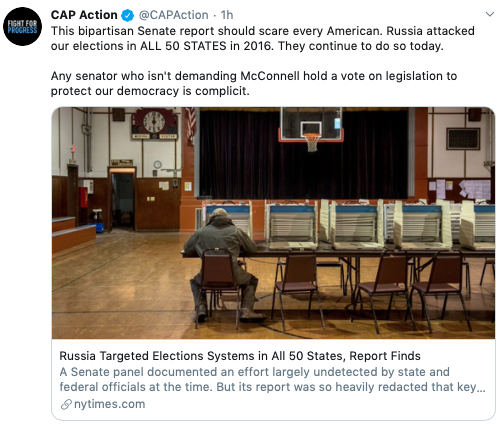 Check out this report from the Center for American Progress for more on what must be done to secure our elections.

While Trump and Senate Republicans block every piece of legislation that would help working Americans (and spit in the face of our democracy in the process), progressive leaders are rolling out big plans to tackle health care, climate change, and education: