Stand up to the cover-up.

The FBI completed its investigation into sexual assault allegations against Judge Kavanaugh. It’s everything the White House and Senate Republicans wanted—and less.

In just five days, the FBI completed a sham investigation during which:

Why did the FBI conduct such an inadequate investigation? To answer that, we need to look at who was controlling the scope of the inquiry: The White House. Trump promised us an unrestricted FBI investigation. Instead, he gave us a sham.

Surprising no one, Senate Republicans and the White House applauded the sham report and its lack of damning conclusions. Today, Republican Senators like Susan Collins claimed the report suggested a “thorough” investigation.

They can rig the system. They can smear survivors and elevate unfit, angry, partisan liars. They can show their disdain for and disbelief of survivors. But they can’t silence us.

Join us tonight to raise our voices in opposition to Brett Kavanaugh. Head to the Capitol grounds at 6:30pm – between the Capitol and the Supreme Court. We’ll be there until the final vote on Saturday. 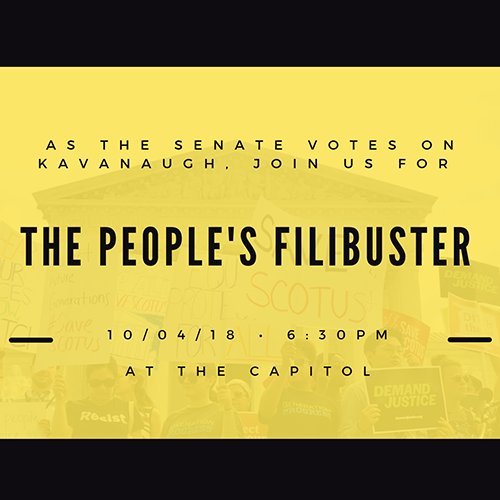