Stand up for a woman’s right to choose

Your body, your choice

With extreme abortion bans popping up across the country, a conservative Supreme Court, and a Republican party determined to endanger women’s health and rights, it’s time to take a stand.

Alongside groups like NARAL and Planned Parenthood Action Fund, we’re sponsoring rallies across the country tomorrow, May 21. Join us.

Trump, Republicans in Congress and in state legislatures, and several members of the Supreme Court want to gut or overturn Roe v. Wade and strip American women of the right to safe, legal abortion access. We know because they told us.

Share this video to remind everyone what’s at stake, and find a #StopTheBans event near you: 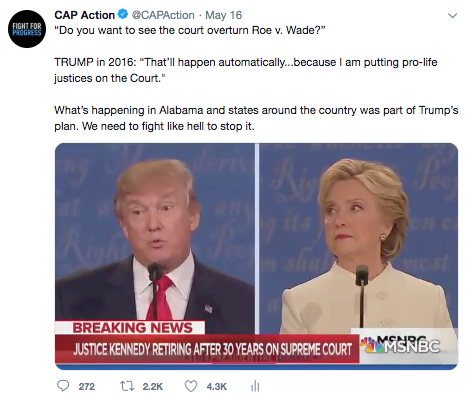 While you were distracted, here’s a taste of the corruption you missed:

The media is rightfully consumed by the dangerous attacks on women detailed above—and, as a result, more of Trump’s corruption is slipping through the cracks: