The tax bill was a scam.

Trump promised to save manufacturing jobs in Ohio and Michigan. He lied and gave companies like GM massive tax breaks instead.

Now, thousands of GM workers like Nanette are suffering the consequences: 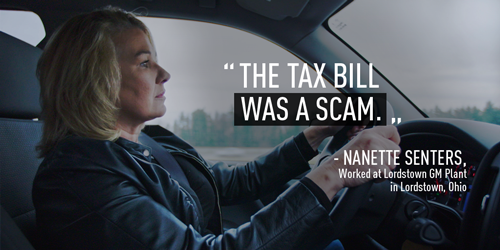 Nanette worked at the Lordstown, Ohio, GM plant for 20 years. She lost her job last week, along with thousands of other workers, when GM closed the plant—despite raking in billions in profits last year.

Another Lordstown worker, John DeGarmo, has worked at GM for 12 years at four different plants. DeGarmo, father to a 3-year-old daughter, faces the agonizing choice now laid before many GM employees: Take a job far from your home and family, or lose your job entirely.

Meanwhile, Trump’s 2020 budget proposes an $86 million cut to a program that helps dislocated workers gain new skills and find new jobs. First, he lied. Then, he screwed American workers. Now, he wants to strip funding from programs that can help in the fallout.