Tell us again how there was “no collusion”

Tell us again how there was “no collusion”

That’s the number of known contacts between Trump associates and Russia-linked operatives during the Trump campaign and transition. Trump himself was aware of the contacts—and his team did everything they could to hide them, including lying repeatedly and under oath.

251 isn’t a coincidence. It’s not a fluke. It’s collusion, clear as day, just as Mueller’s redacted report revealed. What else is hidden in the redacted portions of the report that Attorney General Barr refuses to release? What more do Mueller, former White House Counsel Don McGahn, and Trump’s tax returns have to reveal?

Share this graphic on Facebook and Twitter to make sure that every American knows: Trump and his team colluded, and they’re still scrambling to cover it up. We must hear directly from Mueller and see his full, unredacted report. 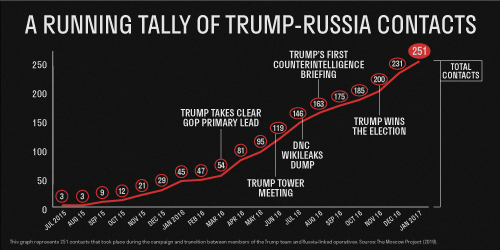 The faces of Trump’s broken promises

What happens to a factory town when the factory closes? Ask the people of Lordstown, Ohio.

A new photo essay in the New York Times Magazine illustrates the human cost of Trump’s broken promises to autoworkers in the Midwest: