Even substantially redacted, the Mueller report makes clear that 1) Russia launched a full-scale attack on our democracy, 2) Trump and his team knew and eagerly embraced Russia’s help, and 3) Trump repeatedly tried to obstruct justice.

Trump and his cronies are continuing the three-year disinformation campaign that Mueller exposed. On deck today: Jared Kushner, who falsely dismissed the 2016 Russian election attack as just “a couple Facebook ads.”

Don’t let Trump and Kushner get away with their dangerous lies. Share this video to hold them accountable: 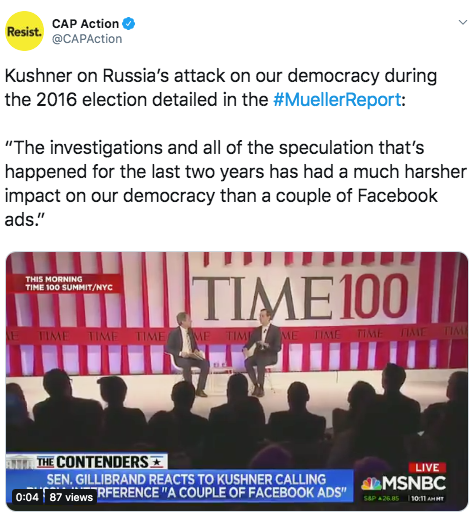 Here’s what Republicans are doing to cover up Trump’s collusion and corruption:

In contrast, this is what Democrats are doing to hold Trump accountable:

One party is defending a president who not only tried to cover up an attack on the United States by a hostile foreign power but welcomed it all along. The other is bringing corruption to light so that the American people can hold our leaders accountable.