Days after the passing of Senator John McCain and the deaths of two people in a shooting in Jacksonville, Donald Trump’s top priority remains the same: himself.

On the day of McCain’s death, Trump sent one tweet sending thoughts to McCain’s family. No words of respect for McCain himself. The day following McCain’s passing brought a tweet attacking the “fake news” and alleging false high approval ratings about his own presidency and another attacking President Obama’s legacy.

Then, Trump gave no response at all to the mass shooting in Florida that took two American lives and wounded eleven other people.

When he finally did address the tragedy in Jacksonville, Trump said, “That was a terrible thing indeed. And how it happens, nobody really knows.” (Except, everyone really does know.)

In the midst of a public show of disrespect for Senator McCain and a country feeling the aftereffects of yet another mass shooting, Trump took to Twitter again this morning.

Today, on the anniversary of the March on Washington, he wrote a tweet reading: “President Trump has done more for minority groups in this country than any president in decades,” quoting Fox Business anchor Lou Dobbs.

This President’s narcissism knows no bounds.

Yet, Republicans in Congress refuse to take Trump to task. The average Republican Member of Congress votes with Trump’s agenda 93% of the time—whether or not it’s in the best interest of his or her constituents.

We’ll remember their support of President Trump and their votes on Trumpcare and the $2 trillion GOP tax scam in November. 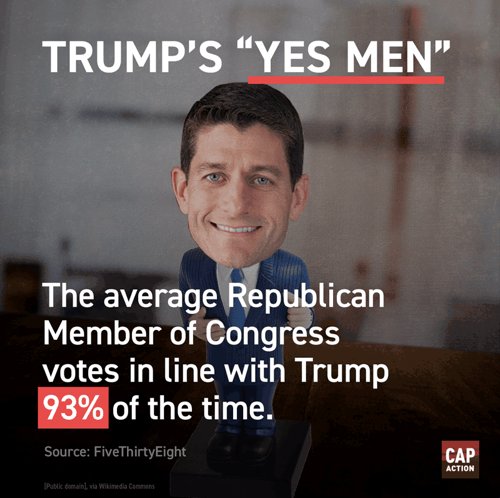 This week on Off-Kilter: A few of our favorite conversations from this year, including Professor Philip Alston and his poverty report for the U.N.; Thea Bryan, a DC bartender who lost her job after speaking out in favor of Initiative 77; and Chad Bolt on why Indivisible’s 435 campaign is backing activists-turned-candidates to bring about a Blue Tsunami in November. Subscribe to Off-Kilter on iTunes.