At last month’s Workers Forum, we asked progressive leaders to make their case for the most important steps we can take to immediately improve the lives of working Americans.

For former HUD Secretary Julián Castro, raising the minimum wage is paramount. In the latest installment of our video series with progressive leaders, Secretary Castro makes the case for increasing the minimum wage to $15 an hour, ensuring equal pay for women, and getting big money influence out of politics.

No one should have to work two or three jobs to make ends meet. Share Secretary Castro’s plan to help working Americans on Facebook and Twitter: 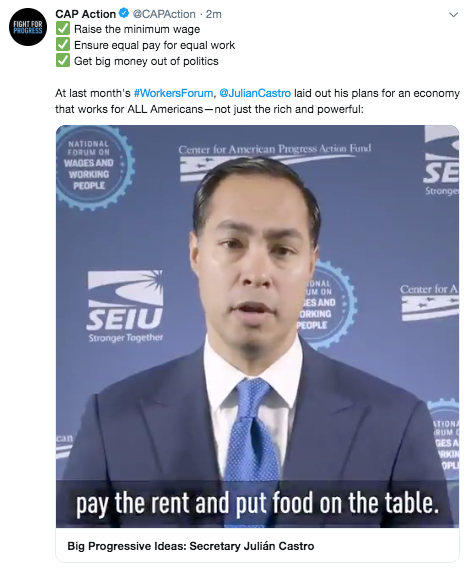 We’re highlighting progressive visions for an economy that works for everyone:

As Trump and Republicans in Congress falsely accuse progressive leaders of inaction, those leaders keep churning out policy proposals that would actually address issues that impact Americans every day: