Trump sets record for most lobbyists in Cabinet

Why hire lobbyists when you can just have them run the government themselves? In just three years, Trump has appointed more lobbyists to his Cabinet than his most recent predecessors did in two full terms, “putting a substantial amount of oversight in the hands of people with ties to the industries they’re regulating.”

His EPA administrator, charged with making sure our air and water are clean? Former coal lobbyist.

His nominee for Labor secretary? Eugene Scalia, a lobbyist who spent much of his career “in court cases on behalf of business interests challenging labor and financial regulations.”

Despite his attempts to stonewall and distract from the topic at hand, Corey Lewandowksi did not succeed in protecting Trump during yesterday’s House Judiciary hearing.

He confirmed Mueller’s finding that Trump directed him to ask Attorney General Sessions to un-recuse himself from overseeing the Russia investigation—just one of 10 incidents of attempted obstruction Mueller describes. Lewandowksi also parroted Trump’s dangerous attacks on the honesty of the media and admitted that he feels no obligation to tell the truth unless under oath.

This morning, CNN’s Alisyn Camerota caught Lewandowski in blatant lies as he tried to backtrack from his testimony, falsely claiming that the Mueller report found “no collusion, no obstruction”—another bogus Trump talking point. 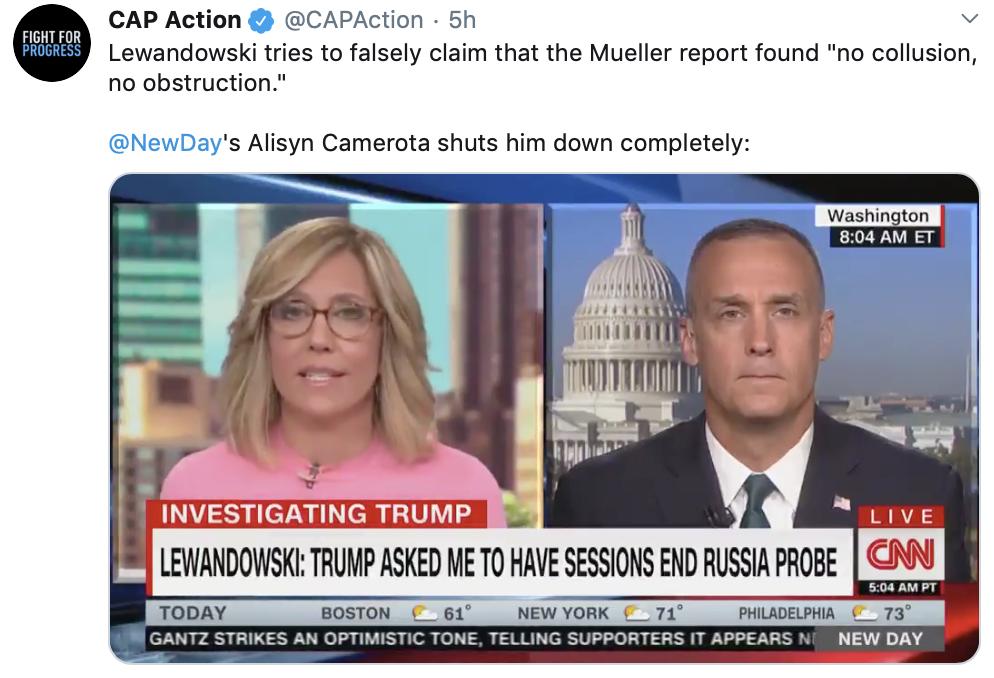