Because of Trump’s broken promises on health care, Americans are living in fear

Imagine living in fear every day that you won’t be able to afford the medication and care you need to survive.

Many of the 134 million Americans with preexisting conditions don’t have to imagine it; that fear is their daily reality. Why? Because of the Trump administration’s unrelenting attacks on our health care, most recently through a lawsuit in federal court to fully repeal the Affordable Care Act and attempts to undermine the law’s nondiscrimination protections that will harm women, transgender people, and many more communities.

Trump broke his repeated promises to protect people with preexisting conditions, many of whom have access to quality, affordable health care because of the Affordable Care Act.

Felicia Perez is one of those people. She lives in Reno, Nevada, and has an autoimmune disease that causes tumors to wrap around her optic nerve and brain. She’s terrified that her life will once again be at risk if Trump succeeds in repealing the ACA. 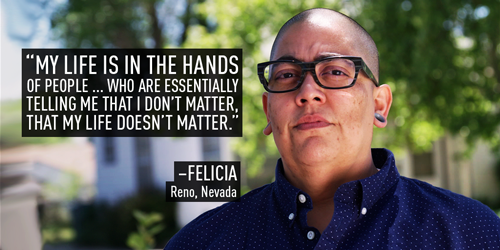