Trump turns his trade-war-by-Twitter toward his immigration obsession

Last night, Trump announced another economic policy that could hurt millions of Americans. Trump tweeted that on June 10 he’ll be placing a 5% tariff on Mexican goods coming into the U.S. until Mexico “fixes” the immigration issues facing the Southern border—a humanitarian crisis fueled by Trump’s cruel, inhumane policies, which Trump himself could solve if he really wanted to.

Who pays the price for the tariffs Trump recklessly imposes? You do. Tariffs on Mexican goods mean price increases on cars, produce, and other items Americans purchase every day. It’s essentially a massive tax on American families.

Trump has become even more erratic and desperate since Mueller’s press conference. Now, he’s abusing his tariff-by-tweet habit as a tool to fuel his racist immigration obsession (and use immigrant-bashing to deflect criticism), and the real victims will be working people on both sides of the border.

At the same time, the Congressional Research Service confirmed this week that Trump’s tax scam is working exactly how he intended: it’s making the rich richer while working Americans’ wages have barely budged. 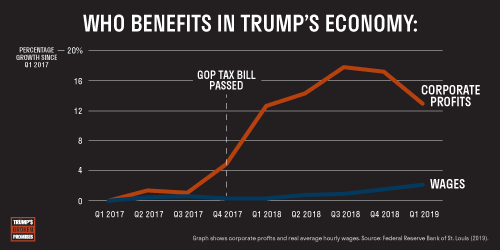 Here’s what you need to know going into the weekend: