Trump took the stage at a rally in Mississippi and proceeded to savagely attack Dr. Blasey Ford’s credibility and her brave testimony. 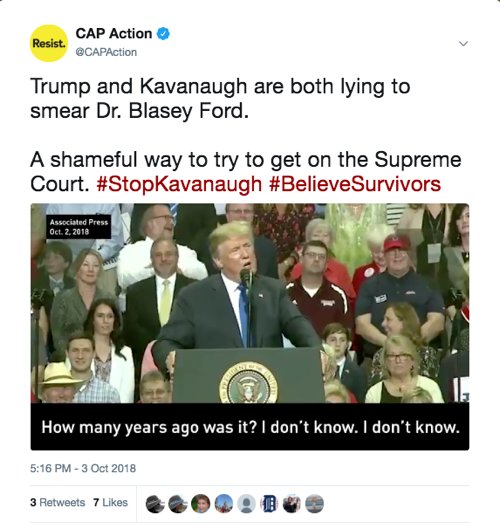 Dr. Blasey Ford did, in fact, provide many of those specific details, and it was not at all unusual that she did not remember every single one. Above all she remained unshakeable on the one thing that mattered—her allegation that she was sexually assaulted and that Brett Kavanaugh did it.

More alarmingly, the President of the United States is engaging in a pointed smear campaign against a woman who is facing death threats and ridicule for her brave choice to come forward.

Trump isn’t alone. His surrogates are on board, and Brett Kavanaugh himself smeared Ford under the guise of civility during his hearing before the Senate Judiciary Committee last week.

TAKE ACTION: Join a national vigil to #StopKavanaugh tonight, and if you’re DC-based, join a rally to #CancelKavanaugh and #BelieveSurvivors tomorrow at 12:30pm ET.

Read the 11 biggest takeaways from the story:

Trump’s attorney strongly denies the claims. For the public to be sure, we would need to see his tax returns.

However—and conveniently for Trump—just three weeks ago, 21 Republicans on the House Ways and Means Committee voted to keep Trump’s tax returns a secret.

Trump’s life story illustrates just how little the wealthy paid in taxes even before the first #GOPTaxScam. Now, many House Republicans are trying to pass a second and more permanent one, all while shielding the president from the law.

P.S. – Want to know how this Trump bombshell relates to the Russia investigation? The Moscow Project has you covered.