Trump “wants to cut everything.”

Trump’s attacking our care. Americans are paying the price.

Karl Dahlke was blind by age 10. His wife, Wendy, was in serious danger of losing her sight, too, after multiple insurance companies refused to cover her. Thanks to the Affordable Care Act’s Medicaid expansion, they are able to get Wendy the care she needs, saving her eyesight.

Trump promised not to cut funding for Medicaid or Medicare. His latest budget cuts both and would take Medicaid coverage away from Americans. He promised to protect people with pre-existing conditions. He lied about that, too. Trump’s relentless attacks on our health care endanger the health of millions of Americans. 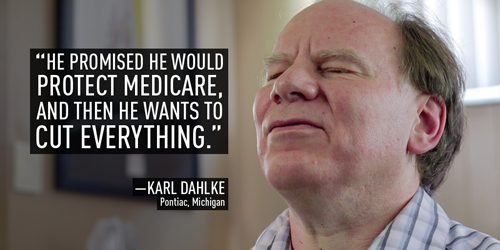 Medicaid expansion has enabled millions of Americans like Karl and Wendy to enroll in health coverage. If Trump’s latest attacks on the Affordable Care Act through the courts were to succeed, nearly 20 million Americans would become uninsured.

House Democratic leaders are working to protect our care. The House is voting today on the Protecting Americans with Preexisting Conditions Act of 2019 (H.R. 986). The bill is a key step toward ensuring that the 134 million Americans with pre-existing conditions can’t be charged more or turned away by insurers because of their medical history.