What Trump wants you to lose

Republicans take aim at the Affordable Care Act in court

Oral arguments begin today in the Republican, Trump-backed lawsuit to repeal the Affordable Care Act. Coverage for 20 million Americans and protections for 134 million people with preexisting conditions hang in the balance.

But it’s even more than that. The Affordable Care Act ensures access to free birth control, mammograms, and cholesterol tests for millions of families, including those with employer-based insurance. It helps keep Medicare and prescription drug costs down for seniors. It helps hundreds of millions of Americans on a daily basis—and Trump and his Republican allies want to rip all of that away.

Share this graphic to make sure your family and friends know what’s at stake in Trump and Republicans’ latest attack on our health care: 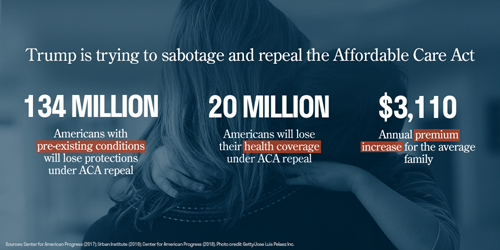