During the disastrous trip, Trump censored the American press and sided with Kim Jong-Un’s absurd account of the death of American college student Otto Warmbier. Then, negotiations completely collapsed when it turned out that North Korea’s position was nowhere near what President Trump has been claiming.

Many predicted that the summit would be a diplomatic amateur hour. Here are three reasons why they were right:

His lack of negotiating skills aside, Trump also drew bipartisan outrage with his comments that he believes Kim Jong-Un’s denials about any involvement in Otto Warmbier’s death.

If this sounds familiar, it’s because it is: Trump drew similar ire after he sided with Russian President Vladimir Putin’s denials of (the proven) Russian interference in the 2016 election, and again when he defended the Saudi Crown Prince’s insistence that he had nothing to do with Jamal Khashoggi’s brutal murder.

As CAP’s Mike Fuchs wrote, “It’s sad to see an American president embarrassed by the world’s most ruthless dictator, but that’s what the world just saw in Hanoi.”

Amateur hour must end. For the sake of national security, it’s time for real diplomacy to begin—and for Trump’s self-aggrandizing photo ops to end.

In a 52-47 vote, Wheeler was confirmed with the most recorded “no” votes of any EPA administrator in history—even more than scandal-ridden former administrator Scott Pruitt.

Wheeler fits the Trump administration mold, is notoriously awful on all climate-related issues, and is a manifestation of Trump’s broken campaign promises. Remember when Trump promised “crystal clear and clean water” and “immaculate air?” As Acting EPA Administrator, Wheeler already rolled back key pollution restrictions (including on coal-fired power plants) and put thousands of American lives at risk.

This vote is yet another reminder that in the GOP’s #CultureOfCorruption, special interests and pay-to-play politics reign, and American voters lose out every time.

But these House Republicans still sided with the NRA: 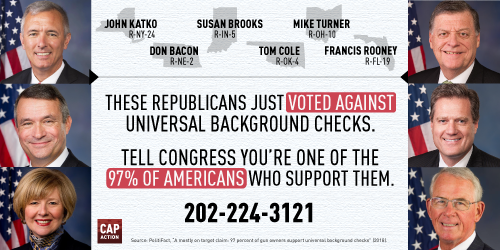