43 million Americans like Danielle Murray, an elementary school teacher from Philadelphia, owe a combined $1.5 trillion in student debt. Murray is still paying off her student loans at 41 years old—and now she’s getting ready to send her son to college at the same time.

Despite his promise to “fix” the problem, Trump’s administration has gutted programs that help alleviate student debt. People like Danielle are paying the price.

Reality check: Trump’s “great” economy is only great for the rich

While Trump has made the rich even richer, he’s left working people even further behind. As the New York Times noted today, “A core promise of President Trump’s economic policies—on trade, taxes and regulation—is that they will bring back a wave of jobs that had been outsourced and investment that was driven offshore. So far, there is no evidence of that.”

Job growth is down 15% from Obama-era levels. The Trump administration’s tax cuts for the wealthy didn’t produce the job growth he promised, and his erratic trade policies (if you can call them policies) have “pushed factory activity not to the United States, but to low-cost Asian countries other than China, like Vietnam.”

Farmers, in particular, are suffering from Trump’s broken promises and reckless trade-war-by-tweet. Trump swore he’d “take care” of farmers. Instead, since Trump took office, family farm bankruptcies in the Midwest have skyrocketed 45%.

For more on how Trump’s broken promises have impacted your state, head to TrumpsBrokenPromises.org. 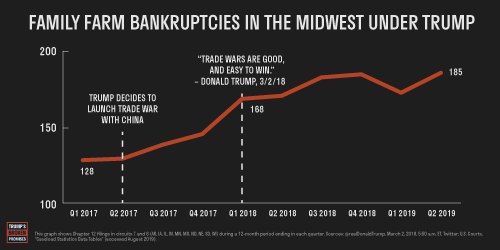