As Natasha Bertrand writes, “Paul Manafort’s Cooperation With Mueller Is the Biggest Blow Yet to Trump.”

Despite months of President Donald Trump trying to dangle a pardon in front of him, news broke today that Trump’s former campaign chairman Paul Manafort entered into a cooperation agreement with Special Counsel Robert Mueller and the Department of Justice.

As part of the agreement, Manafort pleaded guilty to conspiracy against the United States and conspiracy to obstruct justice. The agreement also reportedly requires cooperation “in any and all matters as to which the Government deems the cooperation relevant.” 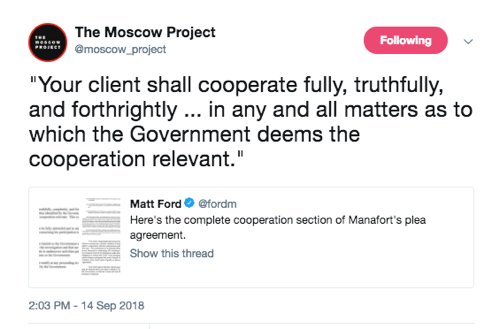 That means if Robert Mueller asks Manafort questions damaging to Trump or his family members, Manafort must answer. As you’ll recall, Manafort attended the infamous Trump Tower meeting set up by Don Jr. along with Jared Kushner, and several self-proclaimed representatives of the Russian government for dirt on Hillary Clinton.

As The Moscow Project noted today, we’re especially interested in his answers to one question in particular:

What did Trump know, and when did he know it?

President Trump lavished praise on Manafort for not flipping after the convictions in his Virginia trial, but his twitter has been interestingly silent since the cooperation announcement.

Manafort’s flip makes another thing startlingly clear: Brett Kavanaugh must not be confirmed as the next Supreme Court Justice. Kavanaugh made it clear during his confirmation hearings that he would protect a sitting President Trump from prosecution—a scenario that’s all the more possible now.

Raise your voice this weekend. Call your senators at 202-224-3121 and demand they vote to #StopKavanaugh.

For more information on Manafort’s cooperation agreement and what it means for Donald Trump, check out this new dispatch from The Moscow Project.

Jared Bernstein unpacks the new Census data on poverty, income, and health insurance; Liz Weintraub on how Kavanaugh’s confirmation would set disability rights back 50 years or more; and Jeremy Slevin returns with the news of the week, In Case Yachts Missed It. Listen here.