So much for Trump’s lazy claim that trade wars are “good, and easy to win.” Or his promise that “the jobs, incomes, and security of the American worker will always be my first priority.”

The Trump administration’s trade policies, guided by Trump’s erratic, random tweets, will cost the average U.S. household $831 per year. That might be chump change for Trump, but it’s serious for the 40% of Americans who can’t afford a $400 emergency expense. Meanwhile, farm bankruptcies in the Midwest have skyrocketed 45% since Trump took office, due in large part to Trump’s trade ineptitude. Trump has had no strategy, no endgame—just Twitter rants. 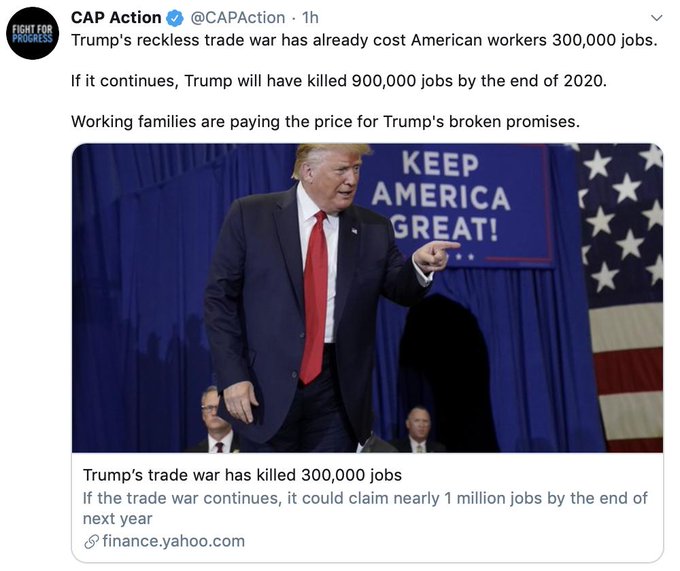 On this day 18 years ago, the world came together to mourn the fallen and stand against hatred. Our country rallied together. Our allies fought at our side in Afghanistan in the wake of 9/11. Then-President George W. Bush made a point to remind America in no uncertain terms that Muslims were not the enemy.

These were the finer points of our nation’s character. Out of darkness and hatred came unity and strength.

Today, sadly, those finer points are under attack. Trump has alienated allies who stood with us after nearly 3,000 people were killed on American soil in an act of terror, demanding that our allies pay us dues that don’t exist. The man who sits in the Oval Office demonizes Muslims, including members of Congress, for political gain. With his Muslim Ban, he intentionally stoked hatred and fear.

It took an extraordinary effort to get a health care bill passed to support the first responders who risked their lives in the wake of 9/11. It only happened because of the tireless work of advocates, terminally ill first responders, and progressive lawmakers.

Today is an opportunity to remind us of those finer points. Today we can remember the power of unity against hate.