When Trump started taking heat for the General Motors plant closures across the Midwest—after he promised to save manufacturing jobs and instead gave GM massive tax cuts—did he take responsibility?

Of course not. Instead, Trump spent the weekend attacking one man: a local Lordstown, Ohio, union leader named David Green.

Why, you might ask? In the wake of the GM Lordstown plant closure that left thousands of American workers jobless, Trump is doing everything he can to distract from his own guilt. 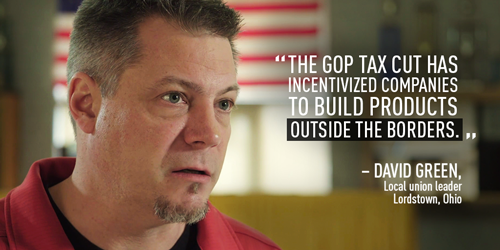 Green spent the last year fighting to keep the Lordstown plant open. He sent two letters directly to Trump begging the president to step in and received no response from the man now lambasting him on the public stage.

Trump followed the same playbook two years ago after a Carrier plant manufacturing air conditioners was set to lay off thousands. Trump attacked local union leader Chuck Jones after Jones called out the President for lying about the number of jobs he was saving. This is the story of Trump’s false promises. He lies, and when those lies come home to roost, Trump attacks the people whose lives he has devastated.

Progressive leaders are helping to share David Green’s story and the stories of the thousands of GM workers who are paying the price for Trump’s false promises. Help share their stories, too, by clicking here.

While Trump parades around the campaign trail, House Democrats are tackling the issues that Americans care about. Here are just a few of the issues they’ll be voting on in the coming weeks:

Trump and the GOP Congress spent two years ignoring the priorities of the people. Now, Democrats are modeling what leadership actually looks like.